The Lone Star Wing was chartered April 30, 1982 with headquarters in Tyler. It was originally formed as the Lone Star Squadron earlier in 1982 with a group of interested men in Tyler led by Robert Layton Jr. and David Saller, with Saller serving as Unit Leader the first two years.

The unit promptly set about to solicit sponsorships for a PBY-6A aircraft that was available for unit assignment. So from April to July 1982 several members went to Lakeland, FL to prepare the airplane for flight to Pounds Field Once at Pounds Field more work followed: fabric work, obtaining parts, disassembly of extraneous equipment. Finally, a test flight was made in time for trips to area air shows as well as to Harlingen for AirSho '83. 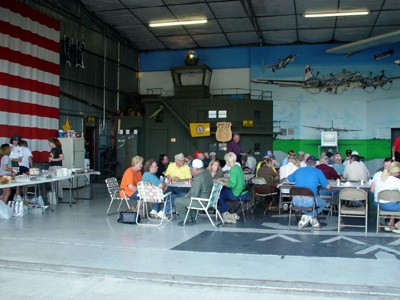 The next year flights were made to air shows at Denton and Little Rock. In September the PBY was flown to Mena, AR for its tri-color paint job. Just in time for AirSho '84. During a low level photo pass above the water the airplane was lost in Laguna Madre. The crash was fatal for five Wing members and 2 other CAF colonels.

The Wing recovered from this tragic loss of members and the PBY but with the assistance of the DFW Wing conducted a successful Memorial Air Show at Pounds Field in April of 1985. By 1986 the Wing's membership had grown to 72.

In 1987 the Longview Squadron was formed to promote the growth of membership in the Longview area. The squadron number grew to 26 during the first year of its activity, as it acquired a PT-17 from the Oklahoma Wing. 1987, 1988 and 1989 found the Wing members putting on successful air shows at Gregg County Airport (now East Texas Regional Airport). Both the B-29 "Fifi" and B-24 "Diamond Lil", attended in 1987. Many current military aircraft attended these shows as well as CAF and privately owned WWII warbirds.

The Headquarters of the Lone Star Wing was moved to Longview in 1990 with the election of Col Doug Beggerly as Leader. While in Longview the Wing opened the World War II Victory Museum on October 1, 1993, enjoyed good attendance by the general public on Saturdays, and opened on special occasions for school groups and veteran reunions. The museum closed in March, 1995 so artifacts were moved to a leased hangar facility at Gregg County Airport where the Stearman was hangared.

In 1998, after a tour of airports in the general area, the Wing acquired a hangar at the Harrison County Airport in Marshall with pledges from members to pay off the balance. At about the same time we were given an unassembled Stearman, located in Addison, TX. Once assigned to our unit by HQs, our members promptly went to get it. In less than two years the five-year hangar note was burned at a hangar ceremony!

In 2001 a self-financed addition was made to the office area to provide a meeting or ready room for members to gather. Semi-annual successful fly-ins have been conducted since our relocation to Marshall and Wing personnel have attended a number of area air shows. The Stearman has carried out its assigned rotation schedule for display purposes at Midland. We now have about 30 members and we are looking for new recruits interested in our aims and objectives.